Highest Paid Youtubers in 2020: See the List of Richest Youtubers. 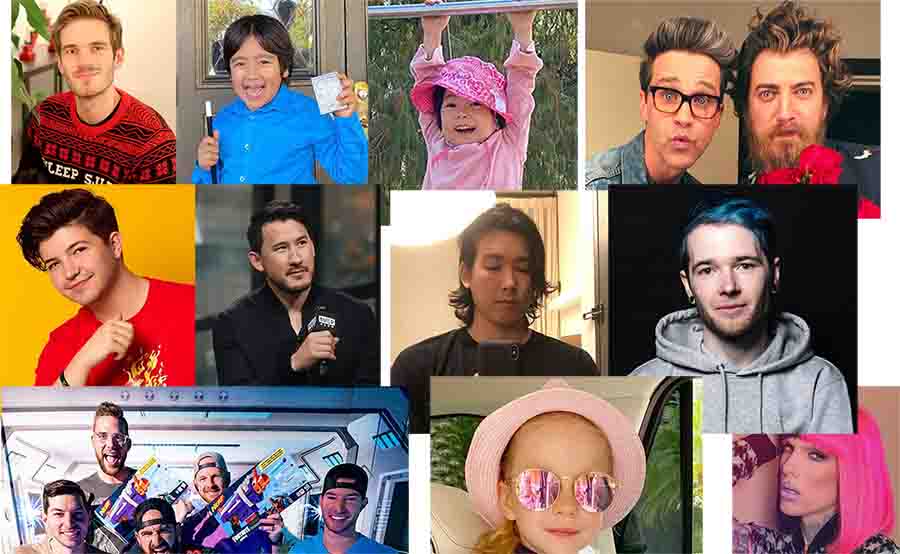 YouTube is easily one of the most popular social media platforms in the world. It was launched more than a decade and a half ago, and to date has over 1.8 billion users a month. YouTube encourages a lot of people to come out and create content.

With all the advertising opportunities available as well, it has created an opportunity for several people to make a decent living. In this review, you’ll get a chance to meet some of the highest-paid YouTubers in 2020.

Felix Arvid Ulf Kjellberg, better known as PewDiePie, is another chart-topping YouTuber. As of February 2020, his channel has over 103 million subscribers. Some of his most popular videos include the title, ‘A funny montage’ which has over 89 million views. Recent projections had his channel pulling in $13 million.

Richest Youtuber of 2020, PewDiePie (Felix) came into this world on October 24th, 1989 in Gothenburg, Sweden. The 30-year-old Swedish content creator is also a published author. Some of his works include the title, ‘This book loves you.’ He is married to a woman named Marzia Kjellberg. Presently, PewDiePie’s net worth is $30 million.

Most people will be surprised to learn that the highest-grossing YouTuber is actually an eight-year-old boy. That’s right, the channel Ryan’s World sits at the top of the YouTube mountain. Just recently, it raked an impressive $ 26 million. Presently, the channel boasts over 24.1 million subscribers.

The channel was first started back on the 16th of March 2015. Some of his content includes exploring different challenges, science experiments, and arts and crafts. His highest-grossing video, the Huge Eggs Surprise Toys Challenge, has garnered about 1.9 billion views to date.  This is not the first time his channel has topped the charts as just last year, Ryan was also the top YouTuber.

Another interesting fact about the young star is that Kaji is not his actual name, but rather a stage persona. His real name is Guan.

Coming in with 49.4 million subscribers, Dude Perfect is another channel that sits at the top of Highest Paid Youtubers list. The channel was set up back on the 16th of March 2009. It is run by Cory and Coby Colton, Tyler Toner, Garrett Hilbert, and Cody Jones. The five friends were all former students at Texas A&M University.

As we are writing, their channel has generated around 10,031,586,684 views. This has seen it register an impressive return of $20 million. Dude Perfect is known for its comedy and sports videos. Some of their most popular videos include titles like Real Trick Shot 3, which boasts over 70 million views.

The YouTuber, Anastasia is another young rising star. Her channel, Like Nastya, amassed a huge following. It has 48.6 million subscribers currently and raked in $18 million going by the recent numbers.

Her Channel was first set up back on the 6th of December 2016. Current numbers suggest that it has 26,894,399,924 views as we speak. Most of the videos on the page show the young content creator and her dad playing. She teaches her new things and they even go out to visit the amusement park.

Ana is just six years old, having being born on the 27th of January 2014 in Krasnodar, Russia. When she was born, doctors feared that she would not be able to speak as she was born with cerebral palsy.

Link Neal and Rhett McLaughlin are a popular friend duo in youtube. These two friends are the creators of the popular online series, Good Mythical Morning. Their channel has 4.78 million subscribers, and their daily content has resulted in a profit margin of $17.5 million.

5th in the list of richest youtube, Link Neal and Rhett McLaughlin started their comedy exploits back on the 5th of June 2006. Their videos mostly reflect the duos comedic range. Did You Get Me Anything? for example, has 7.9 million views to date. Their Epic Rap Battle video, on the other hand, boasts over 46 million views.

Rhett and Link are only a year apart in regards to age. The former is 42 years old while the latter is 41.

Jeffrey Star is a California born YouTube personality, makeup artist, musician, and businessman. He runs Jeffree Star Cosmetics. Jeffree’s YouTube Channel has a following of 17.5 million subscribers. It has earned him $17 million recently. Jeffree’s videos usually focus on fashion, makeup, and cosmetics. The makeup artist usually performs the makeovers on himself.

He launched the platform on the 15th of February 2006 and already has over 2 billion total views. Some of his most recent videos include: we broke up, Addressing the purple issues and Blood Lust. Jeffrey Lynn Steininger Jr was born on November 15th, 1985, and is 34 years old at the moment.

Another in the list of top 10 highest paid YouTubers, is Preston Arsement. With over 11.6 million followers and $14 million in the bank, Preston tops the recent list of highest-grossing channels. The 25-year-old is an avid gamer and frequent vlogger.

He is particularly remembered for his exploits on Fortnite Battle Royal. Videos on his page such as Ultimate Heads & Tails and Extreme Camo Hide & Seek have generated over 2 million views each.

It is therefore not surprising that in the eight years since its launch, it has picked up around 3,749,265,230 views. Preston Blaine Arsement came into this world on the 4th of May 1994.

This YouTuber is more popularly known as Markiplier. With recent annual earnings of $13 million, he is considered one of the highest-paid social media personalities. Mark’s channel has over 25 million followers since it started back on the 26th of March 2012. This platform is famed for its comedy skits, gaming videos as well as cartoon parodies.

His videos tend to generate millions of views. For example, 99 Humans vs. 1 Super Zombie generated over 3 million views to date. The man in question, Mark Edward Fischbach is 30 years old. He was born on June 28th, 1989.

British born Daniel Middleton runs the channel DanTDM. Daniel’s page mostly deals with gaming walkthroughs. These include titles such as Minecraft and Pokémon. Examples of these titles are ‘I rebuilt my Mine craft hardcore’ and ‘This Guy is an IDIOT in Pokémon Sword’. Both of these videos have over a million views.

This comes as no surprise as Dan has over 22.4 million subscribers, which has translated to a Net Worth of $12 million recently. He is 28 years old and celebrates his birthday on the 8th of November 1991. Daniel is widely recognized for his signature multi-colored hair, which is presently blue.

Last but not the least in our list of highest-paid (richest) YouTubers is Evan Fong. The Canadian YouTuber, Evan Fong runs VanossGaming. This is a channel he started back on the 15th of September 2011. Nine years later and it has registered 12,200,356,551 views. This was possible in no small part due to his 24.9 million subscribers.

Some of Evan’s popular videos include his Mine craft Funny Moment Specials which generate millions of views weekly. As such, VanosGaming registered a healthy return of $11.5 million.

Evan came into this world on May 31st, 1992, making him 27 at the point of writing. He is a native of 8. Toronto, Canada. Games are a huge part of Evan Fong’s lifestyle as he regularly plays titles like GTA and Ghost Recon.