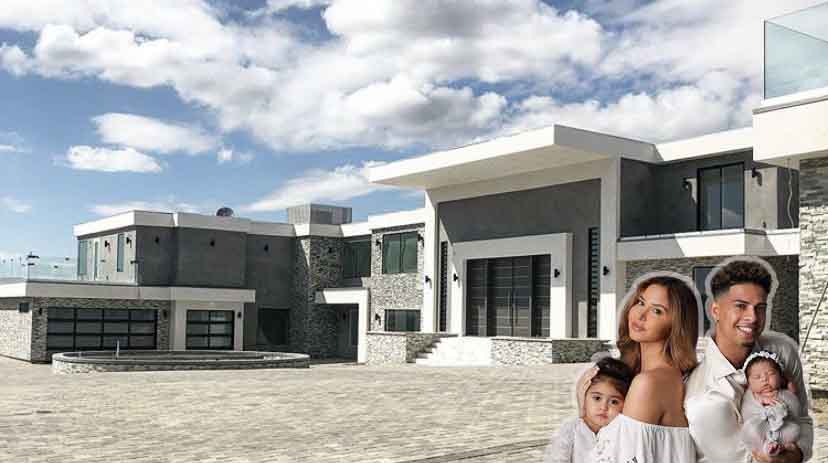 Social media influencers reap a lot of financial benefits from their creative content. The Ace Family is a merry band of creators consisting of Austin McBroom, Catherine Paiz, and their two daughters. The four have given other content creators a run for their money with their combined net worth in millions in less than four years.

Other than their filmed life of luxury, the most mainstream asset talked about is the Ace Family’s New $10 million’s house, and here’s what we know so far.

In the heart of Encino, California, on a hilltop in Woodland Hills lies the Ace Family’s new $10 million’s house that they purchased on May 4th, 2018. Initially, it consisted of two houses, covering 12,000 square feet of space under 1.8 acres of land. They both had 12 bedrooms, 13 bathrooms, and a giant pool. Austin and Catherine merged the two houses and created a mega-mansion that they call a ‘sanctuary.’

What started as a ‘secret project’ is no longer secret following their over 1 hour uploaded video titled, “The Ace Family Official House Tour!!!**Finally**“. The expansion project saw the mega-mansion covering well over 20K sq. ft. of living space.

Every single room has bathrooms with the state of the art floor to ceiling showers and substantial walk-in closets. The mansion also features a gazebo, a sauna/steam room, a home gym, and a balcony connecting the master bedroom to most house parts. It also features a mini-golf course at the back of the house.

One fan called out the Ace Family’s new house as ridiculously huge, considering they are only four. Austin then replied that they typically host many people, hence all the rooms made. He also added that he would expand his family and make the mansion his family’s sanctuary for the next 15-20 years.

The Ace Family Net Worth.

The Ace Family’s net worth reach holds strong at approximately $22 million, according to recent data. However, Austin McBroom’s net worth is estimated at $2 million when you cut its members. On the other hand, Catherine Paiz’s net worth is $2 million.

Both parties get their income streams from the sale of merchandise, sponsorship dea, andas YouTube ads. Moreover, Paiz is also a model with active contracts with Victoria’s Secret, Azzelia Swimwear, and several others.

She is also an actress who starred in movies such as Lilin’s Brood, and You Can’t Have It. Overall, with their diversified sources of income, the Ace Family’s net worth isn’t going down any time soon.

The Ace Family’s new $10 million’s house is pure ingenuity and art combined. It certainly matches their net worth and price range too.